DPM Cooper meets Board and Executives of Bahamasair 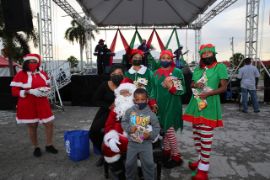 MINISTER AND SANTA – Minister for Grand Bahama, Hon. Ginger Moxey (Seated left) greets Santa and his elves, as some of the children who had turned out for Saturday’s Christmas in the City event posed for a photo with Santa Claus.

Freeport, Grand Bahama – “To the business community in Downtown Freeport, I say to you a new year is dawning and transformation is coming to this area soon,” declared Minister for Grand Bahama, Hon. Ginger Moxey.

“With AML Foods’ acquisition of the old Winn Dixie building, which is presently under renovation and the company’s projected opening of Solomon’s Freeport, Downtown, in early 2022, you will experience the change you have been waiting for.”

Minister Moxey’s remarks came during the first “Holidays in the City” Christmas celebration, which was held on Saturday, December 18, 2021 in the shopping centre parking lot of downtown Freeport. The event, which was organized by the Ministry for Grand Bahama, featured a number of local entertainers, artisans, dancers and musicians, designed to spread Christmas joy while also encouraging residents to patronize the businesses within the downtown community.

BRINGING REMARKS – Minister for Grand Bahama, Hon. Ginger Moxey thanked all of the people who worked together to make the Christmas in the City event on Saturday, December 18, 2021 in downtown Freeport a success.

Minister Moxey noted that this year has been one that was filled with ups and downs, twists and turns. However, she added that in spite of it all, Grand Bahamians find themselves in the holiday mood, enjoying the festivities that come with the season.

“I am thankful to God for giving us another opportunity to come together as a community and I am thankful to all of the businesses on Grand Bahama that have remained opened and kept persons employed,” said Minister Moxey.

“When the Ministry of Grand Bahama began planning this initiative, we wanted to make sure that we connected with stakeholders throughout our community. To create an event that would inject revenue and bring some much-needed assistance to businesses in the downtown and surrounding areas.

“We know that Christmas time is a popular shopping season and for many business owners, it would be the only opportunity for them to generate significant revenue in 2021. So, we created holidays in the city and focused attention on our commercial centre downtown. We then embarked on a promotional campaign to remind the community that businesses that employ residents, provide quality products and services, still operate downtown and this holiday season they need your support.”

HOLIDAY CHEER IN EAST GB — After pulling the switch to light up the Christmas tree and lights within a park in East Grand Bahama, Minister for Grand Bahama, Hon. Ginger Moxey (fourth from left) stands with organizers of the event, on Sunday, December 19, 2021. Member of Parliament for East Grand Bahama, Kwasi Thompson (third from right), and East End Christmas Tree Lighting Committee Chairperson, Pleasant Bridgewater (fourth from right) were on hand for the official lighting of the tree in High Rock.

As a part of the Holiday in the City program, a careful decision to add entertainment was made. The Grand Bahama Minister noted that she has always envisioned downtown as an entertainment centre: a venue where Bahamian culture could be showcased year round and a place where residents and visitors alike can go and enjoy Bahamian music, food, art, crafts and Junkanoo.

So, with strategic planning to create a safe environment for the public and approval from the Ministry of Health officials, the Ministry for Grand Bahama engaged local vendors, talented DJs, singers, musicians and dancers to create an event for the entire family, in order to spread some Christmas cheer downtown and get Grand Bahamians in the holiday mood.

Later on in the evening, Minister Moxey, along with representatives from the Grand Bahama Port Authority lit the huge Christmas tree situated in the centre of the downtown shopping area.

PULLING THE SWITCH – Minister for Grand Bahama, Hon. Ginger Moxey pulls the switch to light the Christmas tree in downtown Freeport, during the Christmas in the City event on Saturday, December 18, 2021. Looking on is Permanent Secretary in the Office of the Prime Minister, Mr. Harcourt Brown.

On Sunday, December 19, 2021, Minister Moxey traveled to High Rock in East Grand Bahama to be a part of the Christmas tree lighting there. Residents from

every constituency in East Grand Bahama showed up for the event that was filled with music, dance, speakers and food.

Minister Moxey said that she was encouraged by the resilient mindset and nature of the people of East Grand Bahama, especially since the passing of Hurricane Dorian.

“East Grand Bahama, I am inspired by you,” added Minister Moxey. “You are truly a resilient people and an inspiration to the entire Grand Bahama community. You’ve endured the worst storm in our nation’s history. You have shared the stories of the harrowing events you experienced in the midst of the storm. You have had to mourn the loss of your loved ones, while rebuilding your own lives and restoring your community.

Minister of Youth, Sports and Culture announces sports is back

“Yet, here you are, two years after Hurricane Dorian, sending a powerful message to the world that at Christmas all roads lead home and East Grand Bahama is your home. Although you have come a long way, I know that there is so much work still left to be done.

“Let me reassure you that you are our priority and assisting you to rebuild your community has been a pillar of the agenda of this Administration. In our Blueprint for Change, our government’s pledge to provide committed leadership to address the needs of disaster victims remains. As your Minister for Grand Bahama, I am strongly committed to ensuring that all is done to improve your communities.” Over the past few weeks, Minister Moxey said that she’s had the pleasure of attending a number of Christmas tree lighting ceremonies around the island, noting that each occasion has filled her with more and more holiday cheer, a sense of nostalgia, bringing back to her mind memories of Christmas past, when life was different on Grand Bahama.

“So, let me encourage you to celebrate this Christmas season with a heart of thankfulness and gratitude to God. For it is He alone who has kept us safe in the midst of the storm.”